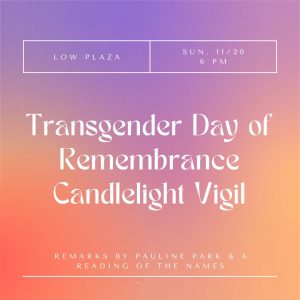 Today, we come together here on the steps of Low Library to commemorate the Transgender Day of Remembrance and I would like to thank Carmelia Perrien Naccarato and the other organizers of this event for inviting me to speak here and commend the students of the Columbia University Mailman School of Public Health who are here today for marking this important moment.

I would also like to thank Gwen Smith, a transgender activist in San Francisco who originated the Transgender Day of Remembrance to mark the death of Rita Hester, a transgendered woman murdered in Boston on the 28th of November 1998. Gwen and a number of other transgender activists organized the very first TDOR on the 20th of February 1999, marching down Castro Street in San Francisco to demand an end to hate crimes against transgendered people.  Now, 23 years later, the Transgender Day of Remembrance is observed in hundreds of cities and towns around the country  — from Albany to Atlanta, from Albuquerque to Anchorage, from Chicago to Seattle, from Boston to Billings, from Bloomington to Baton Rouge. And so when you stand here on the steps of Low Library, you join a national and international movement calling for the end to hate crimes against people based on their gender identity or expression.

This is a movement that has now gone global, with candlelight vigils and commemorations marking the Transgender Day of Remembrance around the world, from Milwaukee to Milan, and from Providence to Perugia; from Princeton to Perth; from Kalamazoo to Calgary, and from Coventry to Kuala Lumpur; from San Antonio to Sydney to Saskatoon, from Burlington to Brussels to Berlin, from Tacoma to Tulsa to Tel Aviv. And so when you stand here on the steps of Low Library, you participate in an international movement calling for the end to hate crimes against transgendered and gender-variant people.

On this solemn occasion, our thoughts naturally turn to the daily struggle for survival that many transgendered people face across the country and around the world. I live in the Borough of Queens, and there have been three violent attacks on members of our community in the County of Queens throughout the nearly 26 years that I’ve lived in Jackson Heights. Laws prohibiting discrimination are important and I was honored to be asked to lead the campaign for the transgender rights law enacted by the New York City Council in 2002. Hate crimes laws are more complicated and those involving enhanced penalties such as under state law here in New York are arguably more problematic because they are reactive in nature: they do not prevent hate crimes but arguably contribute to the growth of the carceral state.

Ultimately, it is a battle for the hearts and minds of our fellow human beings that we must wage — in conversations with family members, friends, colleagues, and neighbors, and fellow human beings as well as through events such as this one and we must aim for and work for nothing less than the transformation of society’s understanding of gender and gender identity — we must dismantle the sex/gender binary that is at the root of the oppression of transgendered and non-binary people, of intersexed people, of men and boys as well as women and girls. We must bring an intersectional feminist analysis to bear on the problem of gender oppression that views it in light of mutually reinforcing discourses of race, class and ableism as well as gender identity. And as we attempt to increase the representation of underrepresented groups in our society, we must refuse to be content with mere symbolic victories that do not change the material conditions in which such marginalized groups live.

Let us come together, then, as a global community of human beings committed to the protection of those most vulnerable to violence. Let us work toward that day when no one will have to fear discrimination, harassment, abuse or violence because of their gender identity or expression or for any other reason. Let us renew our commitment here and now to the paramount principle of non-violence and a national and a global order of justice for all.  Thank you.

Pauline Park is chair of NYAGRA, the New York Association for Gender Rights Advocacy (nyagra.com), a statewide transgender advocacy organization that she co-founded in 1998. She also co-founded Queens Pride House (a center for the LGBT communities of Queens) in 1997 and currently serves as coordinator of its transgender support group; and she co-founded Iban/Queer Koreans of New York in 1997 and served as its coordinator from 1997 to 1999. Park led the campaign for the transgender rights law enacted by the New York City Council in 2002. In 2005, she became the first openly transgendered grand marshal of the New York City Pride March. She did her B.A. at the University of Wisconsin-Madison, her M.Sc. at the London School of Economics and her Ph.D. at the University of Illinois at Urbana. Park has written widely on LGBT issues and has conducted transgender sensitivity training sessions for a wide range of organizations. She was the subject of “Envisioning Justice: The Journey of a Transgendered Woman,” a 32-minute documentary that premiered in 2008.