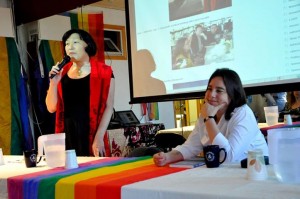 Queens Pride House  has hosted many public forums, quite a few of which I organized. By far the most controversial was “Israel/Palestine is an LGBT issue,” our first-ever forum on Israel and Palestine. Our June 2013 forum might never have come about had it not been for the LGBT Community Center in Manhattan and its expulsion and banning of the Siege Busters Working Group in February 2011.

Distinguished Professor of English at the City University of New York (CUNY), Sarah Schulman teaches at the College of Staten Island (CSI) is one of the leading figures in the LGBT community, not only in New York but nationally. She has written scores of books and plays, most recently, “Israel/ Palestine and the Queer International” (Duke University Press). I had met Sarah before the controversy erupted, but it was through the struggle over the Center that we got to know each other. She appeared at the same March 13 community forum at the Center in 2011 and lambasted the Center’s decision to cave into the intensely bigoted Michael Lucas and ban ban the Siege Busters as well as any discussion of Israel/Palestine. Sarah helped organize the first US tour of a delegation of LGBTQ Palestinian activists in 2011, and she worked with them to help organize the first US LGBTQ delegation tour to Palestine in 2012. Sarah invited me to join the delegation and that tour was perhaps the most important trip I’d taken since coming to the United States from Korea at the age of eight months old.

It was indirectly as a result of my participation in that delegation tour that led to the June 4 forum, but the first Palestine-related event at Queens Pride House was actually when I hosted a Siege Busters Working Group screening of a documentary about Julian Mer-Khamis in May 2011 only a few months after the Siege Busters were expelled from the Center in Manhattan, and that event had caused not a ripple of controversy at Pride House. But of course, the June 2013 forum was different, because it was a Queens Pride House event not only hosted but sponsored by the organization; in fact, the June 4 forum was the very first forum in the history of the borough that featured LGBT speakers critical of Israeli occupation and apartheid, and in putting on the forum, we made history. 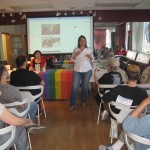 The Queens Chronicle covered the event (“Pride House forum slams Israeli policies,” by Mark Lord, 6.6.13), which noted that our forum drew over 30 people to Pride House, which is as many as we ever get  for a panel discussion on public policy issues. In response to our forum, the Chronicle ran a rather misguided editorial (“An attack on Israel, here in Queens“) that was full of inaccuracies and misconceptions that prompted a letter to the editor from Queens Pride House in response (“It’s about free speech“); our letter to the editor explained the purpose of the forum and the need for LGBT community centers to host and sponsor public forums on controversial issues, including Israel/Palestine, in order to foster open discussion of those issues and their implications for the LGBT community, which at least some members of the community clearly understand (“Israel is no democracy“).

Internally, the only real dissension manifest itself on the Facebook pages of Queens Pride House, where I posted notices about the June 4 forum (without any additional editorializing). There is a another Facebook page — Queer Support for Israel — and on that page, one of the group members posted a message informing the other members about the June 4 forum at Queens Pride House, encouraging them to post comments attacking the organization for putting on a forum that he characterized (falsely, of course) as an ‘anti-Israel hate fest.’ Queer Support for Israel members proceeding to ‘swarm’ our Facebook page, posting scores of hostile comments, to which I responded politely, inviting them to come to the forum to listen, learn and share their perspectives, though not a single one of them did attend the event. 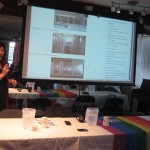 I also posted a very simple notice on the Facebook page of the Queens Pride House English-speaking men’s group, which prompted furious responses from two members — one a regular attendee and another a member whose attendance has been quite irregular, from all reports. One of the members even accused me of a conflict of interest, though I made very clear to him that the organization was taking no position on the interest — a point I made to Mark Lord, the reporter who came to cover the forum, when he interviewed me about it the day after the event, as well as at the forum itself. I was struck by the fact that no one had accused me of a conflict of interest for having organized a forum on May 1 on the human trafficking of Asian women in Queens, even though I am myself an Asian American woman living in Queens.

And in response to the member of the Queens Pride House English-speaking men’s group who had accused me of a conflict of interest, I also pointed out that as a member of the board of directors (secretary at that time), I had organized a forum on the New York State Dignity for All Students Act when the DASA bill was still pending and when, as chair of the New York Association for Gender Rights Advocacy (NYAGRA) and a member of the steering committee of the NYS DASA Coalition (which was leading the campaign for the bill). I was organizing a statewide  tour that included forums on DASA in other cities around the state; at no time did anyone accuse me of a conflict of interest in organizing a forum on Dignity and using that forum (which took place at our site on Woodside Ave.) as an opportunity advocating for that legislation, despite the fact that I was, in effect, wearing two different organizational hats while doing so. 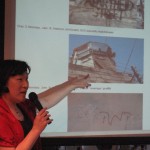 While I am a founding member of the New York City Queers Against Israeli Apartheid, I have never used my position as either president of the board of directors or acting executive director to serve the interests or agenda of QAIA. But as both president of the board of directors and acting executive director it is not only my right by my responsibility to organize public forums on topics of interest, concern and importance to the members of the LGBT community of Queens, and it would be difficult to argue that the issue of Israel/Palestine is not of any interest, concern or importance to them; indeed, the intensely personal and vituperative reaction of two members of the English-speaking men’s group would seem to attest to the interest, concern and importance of the issue to them. And the focus on ‘Israel/Palestine as an LGBT issue’ would seem to be inarguably geared to explaining Israel/ Palestine to the members of the LGBT community of Queens.

Clearly, the charges of conflict of interest had no merit and were simply a smokescreen for the real objection to the forum, which was that the two speakers on the panel were speaking from a perspective critical of Israeli government policy. And in that regard, it would be extraordinary if Queens Pride House as a community center were to announce and impose a policy banning criticism of any foreign government; that is, in effect, what the Center in Manhattan did from February 2011 until February 2013, the leadership of that organization learning that the price to be paid was the opprobrium of many in the community, who rightly saw that policy as contradicting the Center’s own stated mission. For any LGBT community center to prohibit speech — including banning criticism of human rights abuses of both LGBT and non-LGBT people — would run directly contrary to the very core mission of any community center that wishes to call itself a community center.

The intense hostility from the gay Zionists critical of the June 4 forum, in my view, has to be understood as part of a larger phenomenon — the organized campaign of harassment and intimidation that the Israel lobby directs against anyone critical of Israeli government policy, including Israeli occupation and apartheid. No other foreign government is exempt from criticism in the United States of its actions and policies except that of Israel, and it is difficult to imagine any of the critics of the June 4 forum at Queens Pride House supporting a ban at Pride House on criticism of the governments of the Russia, the People’s Republic of China, Saudi Arabia, Syria, Uganda, or Jamaica — all of which have been guilty of gross violations of human rights — including those of LGBT people. But with Israel, there is a double standard, of course, and so a forum critical of its human rights abuses would come in for attack in a way that a forum critical of the human rights records of any of those other regimes would not only not be criticized but most likely applauded by those critical of our June 4 forum. 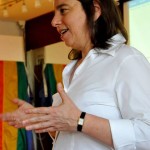 It is striking to me that none of those critical of our forum actually came to the event on June 4; could it be that they were afraid of hearing information that might compel them to re-evaluate their uncritical support for Israel? Rather than respond to their vituperation and threats, I chose to take the high road and invite those critics to come to the forum and ask questions of the speakers and share their perspective with the audience during Q&A; but none of them came. 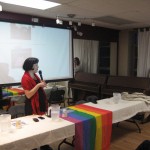 At the forum, Sarah Schulman gave an eloquent presentation on the history of her involvement with the anti-Israeli apartheid movement and I gave a presentation about my participation in the first US LGBT delegation tour of Palestine in January 2012. In doing so, and in refusing to capitulate to the campaign of harassment and intimidation directed against me and the organization, we made history. 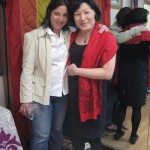 After the forum, NYC QAIA member wrote a letter to the editor of the Queens Chronicle: