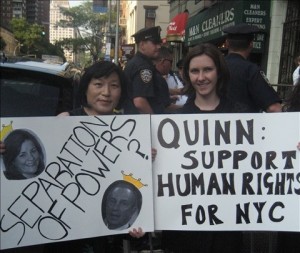 Christine Quinn’s record on LGBT issues as Speaker of the New York City Council25 June 2009– As Speaker of the New York City Council, Christine Quinn declined to take the administration to court over the New York City Department of Education’s refusal to fully implement the Dignity in All Schools Act (DASA), enacted over Mayor Michael Bloomberg’s veto in 2004; instead, Quinn collaborated with the mayor’s office and the Department of Education on Respect for All, which has proven completely ineffective in addressing the epidemic of bullying and bias-based harassment in NYC public schools.

– The Speaker has failed to hold the Department of Education to account for its failure to effectively implement the chancellor’s regulation (A-832) that is supposed to address bullying and bias harassment in lieu of DoE’s refusal to fully implement DASA.– The Speaker has collaborated with the mayor’s office in blocking the Human Rights GOAL bill (Int. No. 731), which could have a potentially significant impact in addressing discrimination based on sexual orientation and gender identity or expression faced by members of the LGBT community in New York City as well as discrimination faced by women, people of color, people with disabilities and others.– The Speaker has done nothing to address the under-funded, understaffed and ineffective NYC Commission on Human Rights, which is ostensibly responsible for implementing and enforcing NYC human rights law  including the transgender rights ordinance which is an amendment to it.– The Speaker has done little to address the problem of police harassment and the false arrests of gay men, other than a limited one-time intervention, and then only after significant media attention threatened to embarrass her office.– The Speaker has done nothing effective or comprehensive to address the far more pervasive police harassment and false arrests of transgendered women (especially transgendered women of color) in New York City.– Despite her stated commitment to institutional reform upon coming into office, the Speaker has run the Council in the same autocratic style as her two predecessors, with individual Council members and even committee chairs still subject to the same command-and-control authoritarian regime of Peter Vallone and Gifford Miller; regardless of whatever direct personal role she may have played, the Speaker must bear institutional responsibility for the slush fund scandal, which happened because she continued the corrupt practices of her predecessors.– Last but not least, the Speaker pushed through a term limits extension bill that will help Bloomberg win a third term, after two terms in which he’s vetoed every LGBT-specific and LGBT-inclusive bill that’s come to his desk (the Equal Benefits Bill and DASA above all), except for the transgender rights bill (which he had no real choice but to sign, since it passed by a veto-proof margin of 45-5). In pushing through Bloomberg’s term limits extension bill, Quinn must accept responsibility for Bloomberg’s third term, including the record that he will accrue on LGBT issues in his third term, should he be re-elected.Pauline ParkChairNew York Association for Gender Rights Advocacy (NYAGRA)