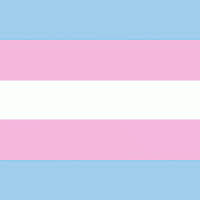 And so the great nomenclature debate continues…

The first misunderstanding about transgender usage is the most easily disposed of. I have had a number of people tell me that an adjective ending in ‘ed’ always indicates something negative or bad; clearly, even the most cursory scan of a dictionary will yield a host of adjectives with a positive denotation or connotation, such as ‘educated,’ ‘sophisticated,’ and ‘nuanced.’ And some adjectives unambiguously indicate something positive, such as ‘honored,’ ‘awarded’ and ‘commended,’ all three of which are commonly used with describe people. Interestingly, even adjectives that have a negative denotation or connotation do not automatically imply something bad about the person to whom they are applied: so, for example, I could say that I am ‘appalled’ by the acceleration of global warming, which does not necessarily say anything bad about me and may in fact suggest something good about me (i.e., environmental consciousness). What is particularly relevant here is that the very term for showing a lack of respect for one’s gender identity is ‘misgender,’ and even those who think ‘transgendered’ is always wrong are most likely to use the term ‘misgendered’ to describe someone who has been referred to by someone else with a pronoun or form of address (‘sir’ or ‘ma’am’) not consonant with that individual’s self-identification. Now on first glance, this reference might suggest evidentiary support for the objection that ‘transgendered’ has a negative valence; but in fact, it proves just the opposite, because if someone can be ‘misgendered,’ then it must follow that someone can be appropriately gendered (i.e., addressed in a way that respects the transgendered person’s gender identity); and the evident meaning of the very expression ‘appropriately gendered’ or ‘respectfully gendered’ proves the point. Nor would anyone say in idiomatic English, ‘they  appropriately gender him/her’ or ‘they misgender him/her’ to indicate the past tense, because it would never be understood as such.

The second misunderstanding about the use of ‘transgendered’ as an adjective is the misconception that such a usage necessarily  indicates something that happened in the past; but many adjectives ending in ‘ed’ can be used to indicate present tense. So for example, when I say, “I’m overjoyed to see you,” I clearly mean that I’m overjoyed right now in this present moment at seeing you, not that I was overjoyed some time in the near or distant past. And of course, the same applies to adjectives cited before, such as ‘educated,’ ‘sophisticated,’ and ‘balanced.’ I try to eat a well-balanced diet in the present, and saying that the meal I’m eating right now is well-balanced is very much about the present moment. The same is true of being ‘right-handed’ or ‘left-handed.’  Nor does acceptance of the term (and concept) ‘misgendered’ substantiate the case for this second objection, because one can be ‘gendered’ in a steady state that refers to a current situation as well as one in the past. To indicate an event that happened in the near or distant past — any incident, in fact — one would have to say, “they misgendered him/her” in order to be understood. But if ‘misgendered’ is correct usage — which I have never heard any objection to — why would ‘transgendered’ always be incorrect? To say that someone was properly, appropriately or respectfully gendered in the past tense requires the ‘ed’ to be understood, otherwise no English speaker would understand the reference as referring to the past tense. So saying that someone is ‘transgendered’ does not in any way imply a past status; to do so and to be clearly understood in English, one would actually have to say, “I was transgendered but I’m not any more” (arguably a dubious notion, but grammatically correct). A variant on this theme is the odd notion that ‘transgendered’ cannot be the correct adjectival form of the word when applied to people because gender identity is an immutable characteristic (a debatable assertion), but even the most cursory perusal of a dictionary will produce a whole list of adjectives referring to what are arguably immutable characteristics that end in ‘ed’ (e.g., introverted, extroverted, conceited, weak-willed, kind-hearted, warm-hearted, balanced, quick-witted, etc.). An even odder variant on the misunderstanding about tense is the assertion that adjectives related to transgender identity should parallel those related to sexual orientation, or perhaps even race, ethnicity and nationality; what I often hear is that ‘transgendered’ can’t be correct because one doesn’t describe gay or lesbian people as ‘gayed’ or ‘lesbianed.’ But ‘transgendered’ as an adjectival form is not describing something that is ‘done to’ the transgendered person by someone else, nor is there any reason to believe that  terms related to gender and gender identity have to parallel those related to sexuality, race, ethnicity or anything else. There is in fact no such internal consistency even among terms related to sexuality alone: so, for example, one can use terms such as ‘gayness’ and ‘lesbianism’ to describe the phenomenon (rather than the people), but it is standard to use ‘heterosexuality,’ ‘homosexuality’ and ‘bisexuality’ to describe the phenomenon of straight, gay and bi sexuality.  And terms related to race, ethnicity and nationality almost always have an adjectival form that differs from the nominative form: e.g., I’m a Korean American; I would never say that I’m ‘Korea America,’ just as one is French or German, not France or Germany.

And that leads to the third objection to ‘transgendered,’ which is the notion that such usage implies that the person being described was the passive subject of someone else’s agency, as in violent acts such as when someone has been murdered or raped; this notion that ‘transgendered’ implies that has done something to someone else is also easily refuted, as with the above-mentioned adjectives ‘educated,’ ‘sophisticated,’ and ‘nuanced.’ One could quibble about the adjective ‘educated,’ arguing that someone else did in fact participate in my education, but one could also describe oneself as self-educated; when it comes to the visual arts, that’s largely true for me, having had only one course in art history, and that in modern art. But ‘sophisticated’ seems not to indicate someone else’s agency; saying of me that I’m sophisticated does not mean that someone else actively ‘sophisticated’ me. And the same certainly goes for an adjective such as ‘balanced’ or ‘well-balanced.’ Saying of someone that s/he is ‘balanced’ does not in any way imply that someone else balanced him or her. And to return to the example in #1, the sentence, “they misgender him/her” will be understood by any English speaker as referring to an ongoing situation in the present. If being ‘misgendered’ does represent a loss of agency, being ‘transgendered’ and recognizing oneself to be and declaring oneself transgendered can in fact be an act of self-empowerment.

Those who believe there is a higher authority to which they can appeal may cite the Associated Press Stylebook, but AP simply took its cue from GLAAD; more often, those who oppose the usage ‘transgendered’ will simply cite GLAAD’s stylebook; but as I argued in “GLAAD is wrong on ‘transgender’ vs. ‘transgendered’,” GLAAD itself offers no persuasive or even coherent argument for its position on the issue, simply asserting (inaccurately) that ‘transgendered’ is always incorrect and asserting further that it is also offensive; that usage doesn’t offend me, though the notion that GLAAD gets to tell me what I call myself certainly does. But the question the appeal to GLAAD begs is this: why does GLAAD have any such authority over linguistic usage? Who elected or appointed GLAAD to determine what is correct or incorrect usage? No one that I know of. GLAAD is certainly a wealthy and influential organization, but so is the Human Rights Campaign, and I have never heard anyone — at least not any transgendered person — suggest that all transgendered people need to accept the authority of HRC.  Variants of this claim would be citing the New York Times, prominent celebrities or elected officials, or prominent members of the transgender community, all of which would beg the same question about linguistic usage authority. Because of GLAAD’s pernicious influence, ‘transgender’ has now begun to appear in dictionaries, but once again, no dictionary has absolute authority over English language usage; like a public opinion poll, any dictionary is simply a compendium of current usage. We have no Academie Française, and even if we did, we would be just as likely to ignore it in practice as do the French. Pour moi, ça va.

And so we come to the last defense, the last bulwark of the ‘transgendered’ is always wrong crowd; at the risk of mixing metaphors, perhaps we might call it the last gasp, because it is no more persuasive than any of the other objections to this usage. The objection runs something like this: everyone uses ‘transgender’ and no one (except maybe some poor uneducated souls) uses ‘transgendered,’ so that means we all have an obligation to use ‘transgender’ exclusively and eschew ‘transgendered’ altogether. Such an assertion confuses the normative and the empirical; as anyone familiar with the fact/value distinction would realize, even if it were true that everyone did X, that would not in and of itself entail or even imply a moral obligation for any individual to do X. But of course, the assertion of universality is not true and one would not have to make that assertion at all if it were. When pressed, the person making this assertion usually falls back to something along the lines of “all my friends use ‘transgender’ and none use ‘transgendered.'” But of course, such an assertion is of no value, because the friends of the person making the assertion could themselves be the outliers. Since no one as far as I know has ever done a survey of usage, any claims to prevalence of one usage over the other can only be based on anecdotal evidence. But one only need think about the question of public opinion polling on this question to see that it is a difficult if not possible one to answer: precisely whom would one survey? The transgender community alone? The entire lesbian, gay, bisexual and transgender (LGBT) community? All Americans? All inhabitants of planet Earth? I suspect most would say, ‘the transgender community.’ But which one? Just that in the United States? And only those who identify as transgender or transgendered? Perhaps some might say, only those who identify as ‘transgender,’ but not those who identify as ‘transgendered,’ which of course would be to bias the response altogether. Surveys of the transgender community in the US alone are difficult to carry out, but a survey of the transgender community worldwide would entail almost insuperable difficulties, and would be seriously biased in terms of Internet access (a global paper survey being impossible in practice) and language usage. In practical terms, there is probably no way even to effectively survey the US transgender community on this question, and restricting the survey to that community of course would represent a serious cultural and even political bias. Ultimately, of course, any public opinion poll is nothing more than a snapshot of opinion at any one given moment anyway. When it comes to language, the only absolute truth is that it is always changing; indeed, the term ‘transgender’ is itself of recent origin and only became popularized in the 1990s. So insisting that the community has come to consensus on usage here in the absence of any evidentiary support is not a persuasive argument or even an argument at all.

Pauline Park is chair of the New York Association for Gender Rights Advocacy (NYAGRA) and president of the board of directors and acting executive director of Queens Pride House. She did her Ph.D. in political science at the University of Illinois at Urbana-Champaign. 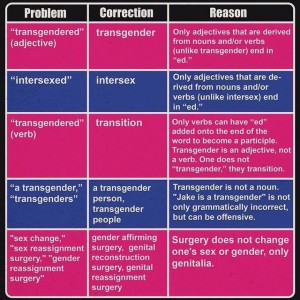 One thought on “transgender usage: 5 misunderstandings about ‘transgendered’”