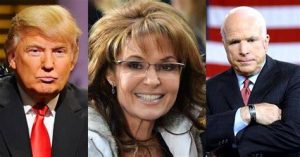 “In many ways, McCain was the anti-Trump: a supporter of a values-based West, a defender of democracy and human rights, an advocate of civilized debate and bipartisan cooperation — a true hero, someone who did not put himself first,” writes Wolfgang Ischinger (chairman of the Munich Security Conference & a former German ambassador to the United States) in an op-ed for Politico.eu entitled “John McCain, the anti-Trump.” I’m not going to post the link because I don’t think it deserves any wider dissemination than it’s gotten because he gets McCain totally wrong but I’m citing the title because I think it’s so revealing about this moment of McCain mania in the media, which are trying to set him up as some sort of antidote to Donald Trump even though McCain actually voted 80% with Trump after he was elected president. Not only was he not the ‘opposite’ of Trump,’ McCain’s pick of Sarah Palin actually helped pave the way for Trump’s nomination & election.

“Any decent obituary of John McCain has to be as much about the media fawning over him as about the man himself. This was a not a good man and yet no one was more lionized by the Beltway media establishment in the entire recent history of American politics,” wrote Erik Loomis (Erik Loomis, “McCain,” Lawyers, Guns & Money, 5 August 2018).  “McCain never saw the prospect of a war anywhere in the world he did not instantly support – in Afghanistan, Iraq, Syria, Libya, Yemen and elsewhere. He advocated for prolonged wars,” wrote Hamid Dabashi, adding, “his legacy is alive and well in Trump’s military logic of US domination around the globe” (Hamid Dabashi, “John McCain: The Impossible Man,” Al-Jazeera, 27 August 2018).

McCain staunchly supported Israel, could not care less for the fate of Palestinians, and for a while even considered the arch-Zionist Joseph Lieberman as his running mate in 2008.

The real McCain was a fairly standard issue right-wing Republican homophobic Islamophobic racist bigot Zionist supporter of Apartheid Israel (Mehdi Hassan, “Despite What the Press Says, ‘Maverick’ McCain Has a Long and Distinguished Record of Horribleness,” the Intercept, 27 July 2017), but you wouldn’t know it from the fawning media coverage of him since his death. I credit McCain for courageously enduring torture in Vietnam & facing his own death and he was vaguely liberal on torture & campaign finance reform & inconsistently so on immigration, but he was absolutely not anyone to be respected let alone admired except for the way he handled his experience of torture & of his impending death. I think the real question is why the mainstream media insist on setting up these false idols and binary oppositions of ‘Trump vs. anti-Trump’ and why the public goes along with this absurdly false consciousness, including most liberals & Democrats — a clear indication of the poverty of our politics in the age of Trump, in which someone who occasionally criticized Trump and occasionally and very inconsistently opposed a few of his initiatives becomes lionized as the avatar of the age (“Obit Omit: What the Media Leaves Out of John McCain’s Record of Militarism and Misogyny,” Democracy Now, 27 August 2018).

Steven Thrasher wrote, “I really hate hagiography, the flattening of meaningful political distinctions, the erasure of racism, and being told by the powerful that everyone better get on the same page and have the same idea and think the same things because of ‘honor,’ because of a ‘good man’ and a ‘good patriot.’ When George W. Bush and Barack Obama jointly eulogize John McCain, it will be yet another way in which any meaningful distinction between the two parties evaporates for many voters. Obama will not only be cleansing McCain’s record of racism, his pro-Apartheid votes, his elevation of Sarah Palin, his war mongering, his savings and loan sandal, and his anti-MLK sentiments. Obama will also be cleansing Bush, and the Iraq war Obama claims to have opposed (which Bush and McCain jointly waged and expanded, to the detriment of millions). This is what’s known as a ‘character laundering,’ as my brother James puts it. Everything bad about the world is imagined right now in the poor character of Trump. But in the death of a ‘good man’ like McCain—lauded by Obama and the last non-Trump Republican president together—forgives *everything* else from both parties under the auspices of patriotism and honor, so that the racist American war machine can roll on unquestioned whenever it’s not in the hands of someone as crude as Trump. It’s disheartening to think of all the hours we worked to elect Obama, to see him (alongside George W. Bush!) memorializing the man who used anti-Arab racism to “defend” him, who waged war repeatedly, who did not ‘cross the aisle’ as he was imagined to do so often to help Obama secure his supreme court seat, who had a decades long history of racism and war-making, who was so inhumane as to support the bombing of Cambodia even after he had years of seeing what American war had done to neighboring Vietnam. And Bush and Obama together will be used as fodder by powerful people to say that those of use who interrogate critically, report critically and think critically ought to shut up in the name of ‘decency’ and ‘civility’ — by the same powerful class who believed Mike Brown was ‘no angel’ and who thinks Black people killed by police don’t even deserve a football player kneeling in their memory. It is depressing how often political and critical thought are foreclosed. ‘Don’t speak ill of the dead’ isn’t waged to speak about Black people killed by police by a media who often uses past *mugshots* when they are *murdered*. But for the mass killers of many, we are told to check our brains at the door and erase the history of politics” (Facebook, 27 August 2018).

But it’s McCain’s own words and actions that discredit him more thoroughly than any critique possibly could:

McCain on abortion: “I do not support Roe versus Wade. It should be overturned.” (2007)

McCain on gay marriage: “Anything that impinges or impacts the sanctity of the marriage between men and women, I’m opposed to it.” (2007)

McCain on Israel: “I’m a student of history and anybody who is familiar with the history of the Jewish people and with the Zionist idea can’t help but admire those who established the Jewish homeland. I think it’s remarkable that Zionism has been in the middle of wars and great trials and it has held fast to the ideals of democracy and social justice and human rights. I think that the State of Israel remains under significant threat from terrorist organizations as well as the continued advocacy of the Iranians to wipe Israel off the map.” (2008)

McCain on border security: “I am asking you and the administration to immediately reconsider your position and send National Guard troops to our southern border region,” McCain wrote in a letter to Homeland Security Secretary Janet Napolitano. (2010).

McCain on news to renew PATRIOT ACT and surveillance: “People seem to have forgotten 9/11,” he said. “People don’t understand that there are thousands of young people all over the world who are motivated by this radical brand of Islam, which is our enemy.” (2015)

McCain on Hindu fundamentalist Narendra Modi: “There is no doubt that Modi is probably the most effective leader that India has had in a long time and the relations between US and India have improved because Modi is co-operative.” (2016)

McCain on Iran: Sang “Bomb, bomb, bomb Iran” to the tune of Barbara Ann by the Beach Boys….

The mainstream media and the entire political establishment are determined to canonize John McCain as a saint to preclude any objective assessment of his actual record in office; we owe itself to ourselves, to history and to the victims of his actions to engage in just such an assessment and reject the hagiography and beatification of St. John McCain.